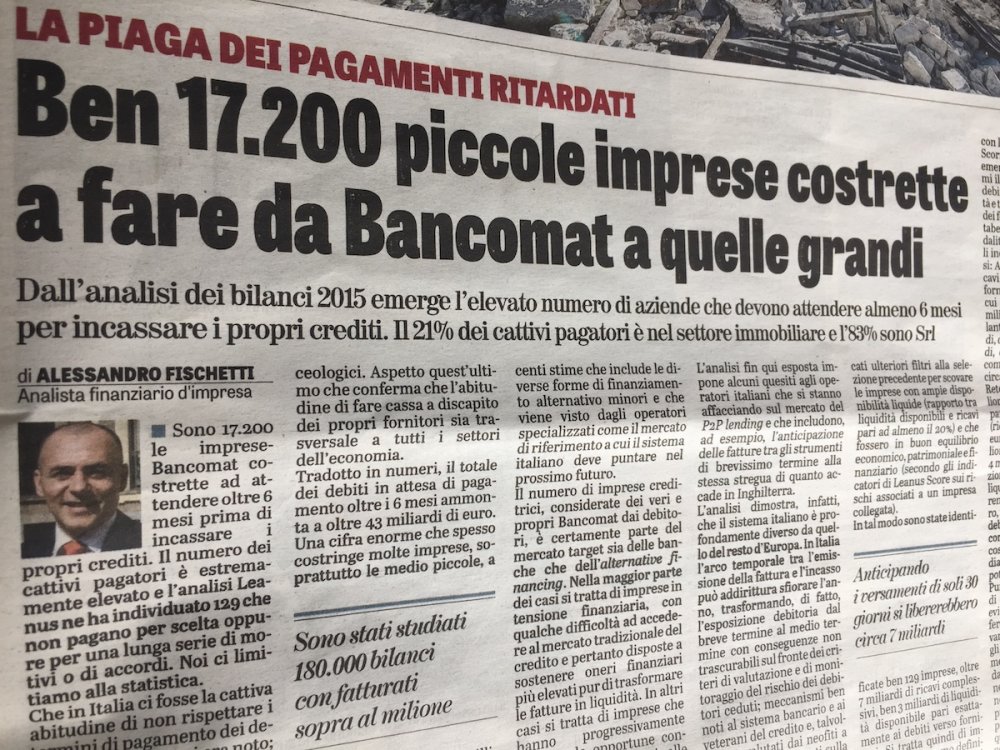 The analysis that made it possible to identify the profile of bad payers not forced by the lack of liquidity and that we could define as "volunteers" was conducted by Leanus starting from its archive of over 180.000 financial statements of companies that recorded 2015 revenues greater than 1 million euros. Initially, both the companies that have collected from their customers over 180 days, and the companies that have paid the suppliers, on average, over the same period of time, regardless of liquidity or the overall economic and asset profile, were filtered out.

From this first simple analysis it emerged that the total number of bad payers is almost identical to that of companies that fail to collect: an army of about 17.200 companies (about 10% of the total) distributed throughout the national territory, of all the size and belonging to all the main product sectors. This latter aspect confirms that the habit of making cash at the expense of one's suppliers is transversal to all sectors of the economy.
Translated into numbers, the total of debts awaiting payment beyond 6 months amounts to over 43 billion euros. An enormous amount of money that often forces many companies, especially small and medium-sized ones, into situations of temporary illiquidity or, at best, to incur financial charges for bank advances. It would be enough for the debtors to advance payments by only 30 days to free up financial resources in favor of the SMEs creditors for over 7 billion euros, a value equal to 2 or 3 times the entire English Alternative Financing market as reported by recent estimates which includes P2P lending, invoice Financing, Crowdfunding and other minor alternative financing forms and which is seen by P2P lending operators as the reference market to which the Italian system must aim in the near future.
The number of creditor companies, considered real ATMs by debtors, is certainly part of the target market of both banks and Alternative Financing ". In most cases, these are companies in financial tension, with some difficulty in accessing the traditional credit market and therefore willing to bear higher financial charges in order to transform invoices into liquidity. In other cases, these are companies that have progressively adopted the appropriate countermeasures, getting used to the habits of the system. Almost always these are companies that simply do not have sufficient bargaining power to impose different conditions; think for example of the army of startups that are also obliged (as demonstrated by the Leanus Observatory) to collect on average over 159 days.
The analysis described so far imposes some questions on the Italian operators who are entering the P2P lending market and which include, for example, the anticipation of invoices among the very short-term instruments in the same way as it happens in England. The analysis shows, in fact, that the Italian system is profoundly different from that of the rest of Europe. In Italy, the time span between the issuance of the invoice and the collection can even touch the year, effectively transforming the debt exposure from the short term to the medium term with non-negligible consequences on the front of the evaluation and assessment criteria. monitoring of the risk of the assigned debtors; mechanisms well known to the banking system and credit veterans and, sometimes underestimated by newbies, sometimes too focused on the frontier of technological innovation.

But who are the bad payers then? Are they due to financial needs not covered by the banking system or are they voluntary bad payers?
To find out, further filters were applied to the previous selection to find companies with large liquid assets (ratio between available liquidity and revenues equal to at least 20%) and that were in good economic, equity and financial balance (Leanus Score, proprietary indicator of the risk profile associated with a company strongly linked to the Altman Z-Score, “green” or greater than 3 on a scale ranging from -40 (company in default) to + 40 (company with almost zero risk of default). In this way, as many as 129 companies were identified, over 7 billion in total revenues, as many as 3 billion in available liquidity equal exactly to the payables to suppliers. These are therefore companies that we could define as “bad payers voluntarily or by choice” as they have sufficient financial resources to reduce their total debt at a more reasonable average time, if not even in line with the European average.
The analysis of the entire sample reveals that the worst voluntary payers are more frequent in the real estate sector (21%) and concern both SRL (83%) than companies in other forms and is more concentrated in the Center and North (Lombardy 21,7%, Lazio 17,8%, Emilia Romagna 10,1%).