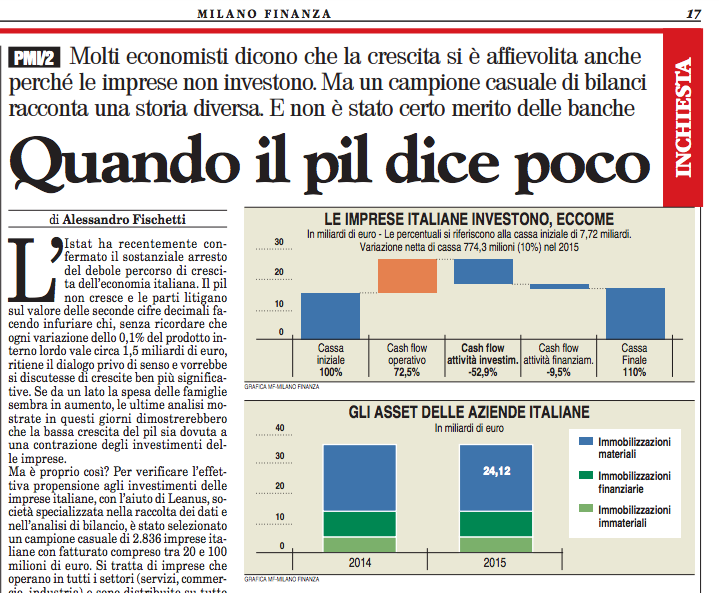 When the GDP says little

Many economists say that growth has also faded because firms are not investing. But a random sample of SME balance sheets tells a different story. And it was certainly not the credit of the banks

Istat recently confirmed the substantial halt of the weak growth path of the Italian economy. GDP does not grow and the parties argue over the value of the second decimal places, infuriating those who, without remembering that every 0,1% change in gross domestic product is worth about 1,5 billion euros, believe the dialogue is meaningless and would like to discussed far more significant growths. While household spending appears to be on the rise, the latest analyzes shown in recent days would show that the low GDP growth is due to a contraction in business investments.

But is it really so? To verify the effective propensity to invest of Italian companies, with the help of Leanus, a company specializing in data collection and balance sheet analysis, a random sample of 2.836 Italian companies with turnover between 20 and 100 million was selected. of Euro. These are companies that operate in all sectors (services, trade, industry) and are distributed throughout the national territory. Overall, the sample of companies generated revenues in 2015 of € 113 billion, equal to 1,7% of GDP. An important sample of the Italian economy, therefore, which was used to verify the consistency between the data presented at an aggregate level and those recorded by individual operators.

a) How much and where have they invested?
In 2015, the selected companies invested around 4 billion euros, almost one billion more than the previous year, bringing the total value of net investments to 37,9 billion, up 2,1% compared to the previous period. A very significant figure that goes in the opposite direction to the overall figure of the Italian system. Another noteworthy element (see attached graph) concerns the type of investments. While recent years have seen an increase in intangible assets, 2015 has instead highlighted the return to investments in tangible assets (real estate, land, production machinery), for a value of more than 24 billion in 2015. and up by 2,5%.

b) Why do they invest more?
Judging from the sample, therefore, it seems that companies have done their part and that they continue to do so, investing, creating jobs and erecting, through continuous productive investments, an ever higher barrier between themselves and their competitors. How did they do it? This is described in the analysis sheet carried out by Leanus on the aggregate accounting data of the sample: the selected companies have growing turnover and good profit margins as well as a good ability to make investments, to the point of allowing the entrepreneurial system to pocket almost 1 billion euros in dividends. The healthy company generates cash which, if used correctly also for medium-long term investments, allows to produce sufficient results to adequately remunerate the entrepreneurial risk.

c) Who helped them invest?
From what emerges from the analysis of the sample, the role of banks in raising capital to invest was marginal. Against an increase in fixed assets of more than 4 billion, the increase in debt was just over 230 million euros (equal to 5,75%). A secondary role therefore, which can hardly be explained except by noting the difficulty of the banking system in identifying the needs of businesses and making an offer system capable of satisfying them in the times and in the ways that a healthy business system requires today. (All rights reserved)

The entire analysis is available for Premium profile users on www.acciamoparlareibilanci.com

1.6.19. Info: Renovations. Out of the tunnel of the crisis (or almost)
1.6.21. Info: The Leanus articles in the new Belpietro newspaper