One in four companies recover after going through a hard period of crisis, the others struggle for at least two years…. 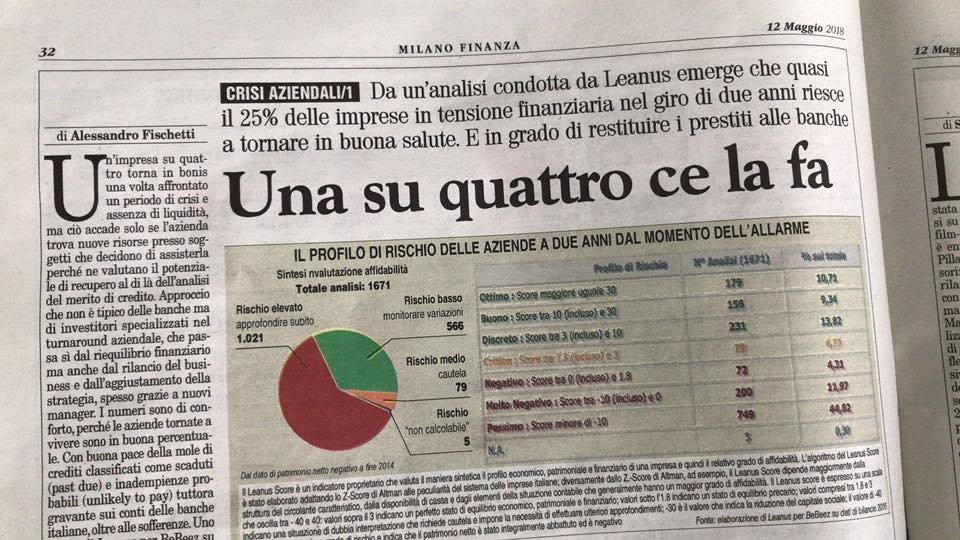 One in four companies manages to return to performing well after having faced a period of crisis and lack of liquidity, but this generally only happens if the company manages to find new finance
which is injected by subjects who decide to assist it because they evaluate its recovery potential beyond the mere analysis of the credit rating. An approach, this, that of
norm is not typical of banks, but of investors specialized in the so-called corporate turnaround, which passes from the rebalancing of the financial situation, but also from the relaunch of the
business and an adjustment of the industrial strategy, often thanks to the hiring of new managers.

*In any case, the numbers are comforting, because economically and financially “reborn” companies are a good percentage. With all due respect to the amount of classified credits
as past due (past due) and unlikely to pay, which still weighs on the balance sheets of Italian banks, in addition to bad loans.

A study conducted by Leanus for BeBeez on a sample of 2903 companies with revenues greater than one million euros they had filed the 2014 financial statements with negative shareholders' equity it shows that 55% of those enterprises (ie 1671 enterprises) were still active after two years, i.e. at the end of 2016, and of these active companies, 43% had returned to performing well, 12% had improved their situation while maintaining strong signs of crisis and the remaining 45% had survived, but with a highly compromised risk profile. Of the other 45% of the 2903 companies that had negative equity at the end of 2014, 83 were in liquidation at the end of 2016, while the other 1228 to date have not yet filed the 2016 financial statements, a sign that probably these are companies that have had problems and that may therefore not have made it two years from the evidence of negative equity. In any case, of the 83 companies in liquidation in 2016, only three defaulted in the following 14 months (January 2017-February
2018).

Looking at the data, therefore, the positive surprise is that there is a good chunk of companies that eventually manage to get back on their feet, despite the fact that at some point they find themselves closing their financial statements with negative equity, a sign unequivocal state of crisis that occurs when economic losses progressively reduce the available assets (given by the sum of share capital, reserves and profits) to zero and even make them negative. As is well known, this condition is regulated by the civil code, which requires directors to take action "without delay" aimed at reconstituting the capital and managing the crisis (articles 2446 and 2447).
h3. Faced with this photograph, the market for financial operators is divided.

On the one hand, those who consider it too risky to approach a segment that has default rates of around 50% at two years; on the other hand, those who consider it a great opportunity to be able to do business on a segment with little or no negotiating power, willing, in order to obtain the necessary finance to support the recovery plan, to accept any commercial conditions proposed.

On the other hand, it is clear that * the mere use of technology and the most sophisticated scoring models, without an adequate use of the human factor * as a determining element of the evaluation process, can lead to distortions and interpretations of the market which are even harmful to the market. entire system and for the revival of the economy. In fact, remaining in the analysis, compared to 3 companies that actually went into default (to which 1228 must be added that have not yet made the financial statements available and therefore could have maintained the state of crisis), as many as 1311 would be automatically excluded from all main automatic scoring systems for evident and significant signs of crisis, precluding any possibility of access to credit due to the automatic evaluation system. Not to mention the 566 companies that returned to performing well in 2016 and had an excellent, good or fair risk profile and which, on the basis of the data at the end of 2014, would in turn have been delisted from the group of "bankable" companies.

*That the ideal evaluation model is the one that provides for both the use of automatic systems and the use of specialized personnel is confirmed by Bank of Italy model or "In-house Credit Assessment System"; (ICAS), intended for the assessment of the credit risk of loans used as collateral in Eurosystem monetary policy operations. The system ICAS, is based on a statistical component (ICAS Stat) and on a subsequent stage of qualitative and quantitative assessment by financial analysts (Expert System).

The statistical component is based on logistical models of discriminating analysis and uses performance indicators, which can be found by the Central Credit Register, and financial statement indicators, in order to produce, on a monthly basis, individual ratings for Italian non-financial companies. The statistical module deals with non-financial companies reported to the Central Credit Register, with at least an exposure exceeding 30 thousand euros.

In the Expert System stage, analysts have instead the task of reviewing the automatic rating of companies whose credits can be assigned as Eurosystem collateral. They can make corrections on the basis of additional qualitative and quantitative information not captured directly from the statistical model, thus reaching a final judgment. Among the elements evaluated in this phase there are, for example, in-depth analysis of the financial statements; assessment of the financial flexibility and self-financing capacity of the company; analysis of the group to which they belong and of the consolidated results; study of the sector to which they belong and of the specific risks of the business; information on corporate governance and management and any other relevant information concerning the rated company.

In short, an approach that is very different from the more traditional one and much closer to that adopted by specialized private equity and specifically turnaround operators.

!The topic will be addressed on next May 31 in MilanOn the occasion of convention organized by Milano Finanza, Leanus and BeBeez on the credit process between regulatory constraints and commercial needs.