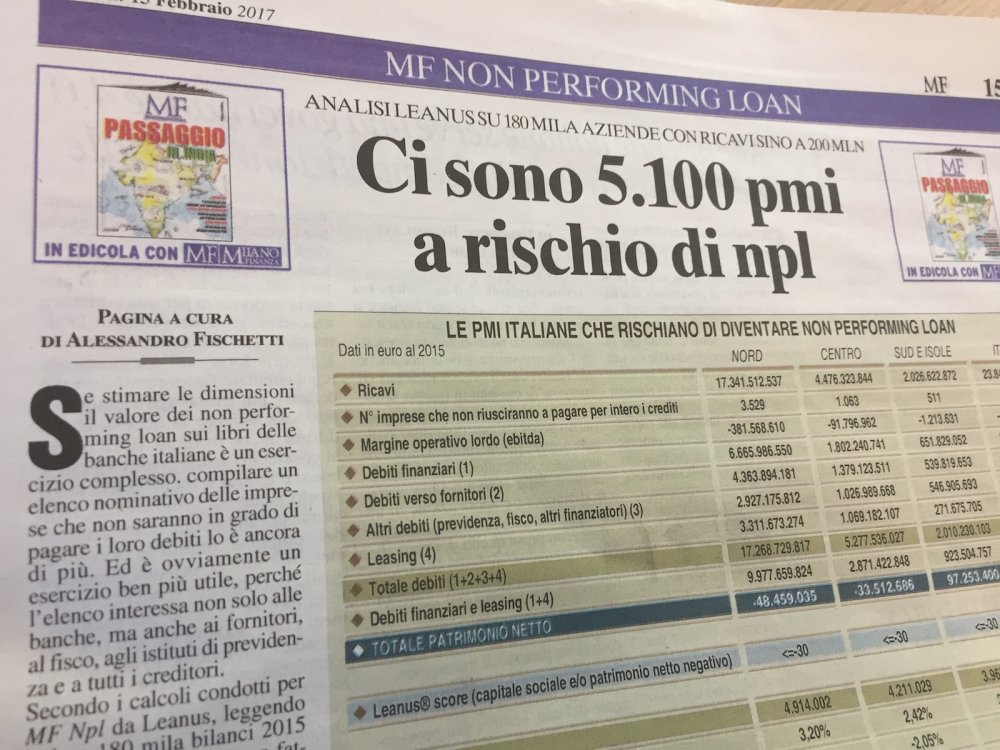 At least 5100 companies are unable to fully pay over 24 billion in debt.

70% are in the North Leanus analyzed 180.000 financial statements for MF to identify companies with clear signs of crisis. Construction, car trade, hotel management and road transport are the sectors most at risk

Whether to estimate the size and value of Non-Performing Loans (NPL) on the books of the banks is a complex exercise. Identifying the name list of companies that will not be able to pay their debts is quite another thing. Knowing the list of companies that are unlikely to be able to fully repay their debts, in fact, interests not only the banks, but also the suppliers, the tax authorities, the social security institutions and all the creditors of the over 5100 companies that risk not being able to collect their credits and in many cases they don't know it. 24 billion in total corporate debts between 1 and 200 million, of which about 50% (13,7 billion) claimed by the banking system, 6 billion by suppliers and the remainder by tax authorities and others. At the top of the ranking Lombardia (1.543), Emilia Romagna (622) and Veneto (580) which host 54% of the 2.754 enterprises at risk; Campania is in eighth place with 148 companies (2,9%); Calabria (28 companies), Valle d'Aosta (23), Basilicata (14), Molise (11) complete the ranking drawn up by Leanus for Milano Finanza by analyzing 180.000 2015 financial statements of Italian companies. Overall, as shown in the table, 70% of the companies are located in Northern Italy, 20% in the Center and the remaining 10% are distributed between the South and the Islands. A figure apparently contrary to the widespread opinion according to which companies in the center-south are riskier than those in the north, but which is justified by the greater concentration of companies in the most productive areas of the country and therefore in the North. It should also be remembered that since these are Small, Medium and Large companies, the location of the registered office is certainly of little relevance for the purposes of understanding the market to which these companies are aimed and therefore of little significance for the purposes of determining the risk. A separate discussion should be addressed in relation to micro-enterprises or sole proprietorships for which localization can certainly have a greater influence. The over 5100 companies identified by the study (2,7% of the total small, medium and large Italian companies) belong to a large number of business sectors, 751 in total, evidence that demonstrates that belonging to a sector should be considered only marginally an indicator of the potential risk to be attributed to a company; the highest concentration of companies in difficulty is recorded in construction (236 companies) but with a share equal to only 4,6%, followed by the wholesale and retail trade of cars and light vehicles (162 companies, equal to 3,2 , 131%) and Hotels and similar structures (2,6 Enterprises, XNUMX%). Photography leaves little room for doubt about the size of the phenomenon; in fact, the survey was not carried out on a statistical basis, but by analyzing the individual financial statements individually to identify the profiles of the companies that have seriously deteriorated. The main criteria used for the selection are: reduction of the share capital and / or negative net equity, Pfn equal to at least 50% of Revenues, liquidity on Revenues of less than 3% and Leanus Score (proprietary indicator of the economic, equity and financial profile of companies) "Bad". Having photographed the phenomenon and understood its actual size, it is necessary to understand which actions and by which interlocutors can help these companies to reverse the trend and to secure the company and the almost 90.000 employees who work there, as well as guaranteeing the return from part of the creditors. To do this, it is necessary to further segment the companies in order to associate targeted therapies and strategies with each subset, trying where possible to ensure that all the interlocutors involved participate in the recovery action, each with their own abilities and possibilities for action. Understanding the real causes of the crisis, a topic to which the bankruptcy law attributes such an important role as to require that an entire chapter of the application for admission to insolvency proceedings be dedicated to this aspect, is fundamental to hypothesize an intervention plan. Excluding the causes depending on actions that can be legally prosecuted by the directors and Regardless of the competitive context, companies are in crisis because they do not promptly address the signs of deterioration, postponing any decided interventions to later times. Companies that go into crisis can hardly get out of it without timely management of financial flows. Not paying suppliers is not the solution nor is increasing debt exposure to the system as long as possible. The expectation of a better future result or a favorable event generally has the effect of worsening the corporate situation and exceeding the threshold of no return. Generally this is the moment in which the banks intervene to ask for the "repayment" or insert the position in a portfolio to be sold by delegating the management to others, the suppliers realize that it is late and try to be the first to obtain an injunction and finally, the taxman intervenes. All operations that look only marginally at the business, at the actual reasons for the crisis and above all at the value that the company, properly restored, can express. Therefore, interventions cannot only be of a financial nature, especially if not accompanied by concrete intervention and relaunch plans drawn up by those who have experience in each specific sector. It could be argued that by the time creditors become aware of the potential risk, it is too late. Certainly true today; in fact, despite sophisticated analysis tools, big data and almost unlimited calculation capacity, banks, suppliers and other institutional creditors arrive unprepared as they are not yet equipped to insert in their systems monitoring criteria capable of anticipating, and not recording, a possible state of corporate crisis and to follow up intervention actions based on the principle of collaboration. The analyzes carried out by Leanus for Milano Finanza on highly representative samples of companies in crisis, show that the signs of deterioration begin at least 3 or 4 years before the actual collapse.

A difficult mission but one that many institutes are progressively carrying out. 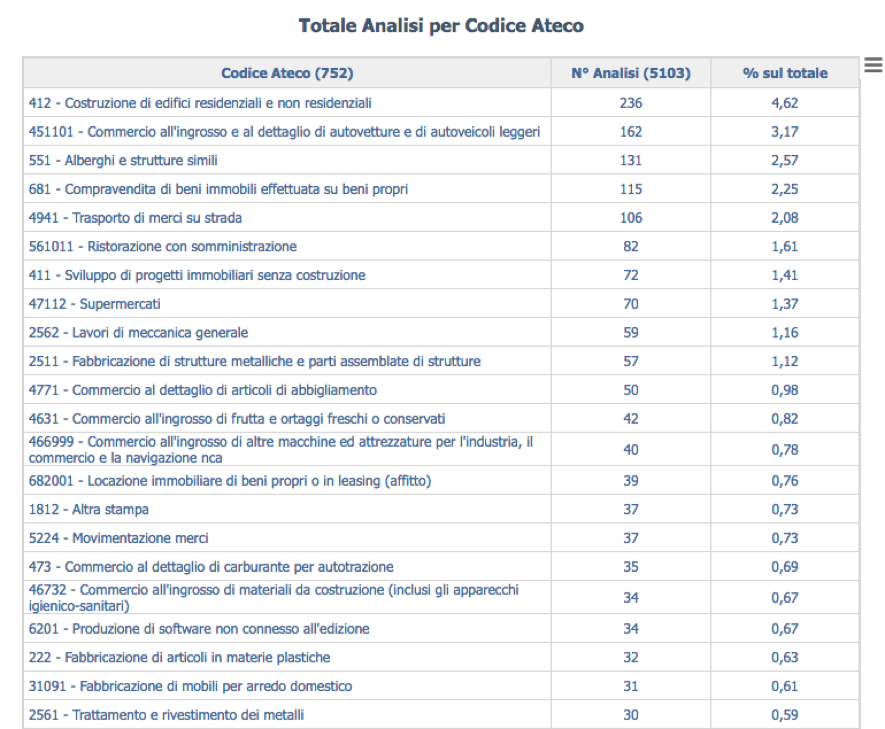 1.6.16 Info: How to evaluate the quality of financial statements
1.6.18 Info: The Startup only makes the consultant rich